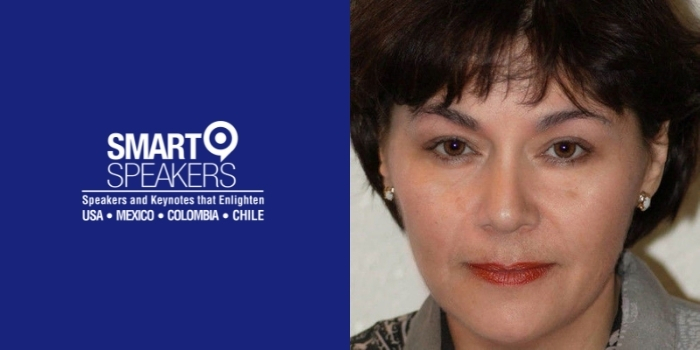 Sophia Von Wrangell is a Speaker and Film Director. Among her main recognitions are the awards and nominations she has received for her film projects, such as the Silver Bear at Berlinale 98 or the New York Times Critics Award.

Sophia Von Wrangell, Luisa Fernanda Spindolla Scarpetta, Luisa Roger or any of the pseudonyms by which this important speaker is known in the world of Cinema and Art, currently runs her companies "Sophia’s Multiverse Inc." And “Sophia's Galaxy” with which she not only self-manages her cinematographic and artistic projects, but also offers specialized consultancies in project development and strategic coaching aimed at developing capacities that help the individual to get out of situations of blockage and frustration with a hard work of conscious and subconscious self-awareness.

Among Sophia Von Wrangell’s professional titles is her degree in Arts from the University of Theater and Cinematographic Arts “U.A.T.C. Ion Luca Caragiale ”, and she is a Multimedia Specialist at the Akademie Neu Isenburg in Germany.

In her diverse career, Sophia Von Wrangell has an important experience as a teacher, with which she has been able to transmit that combination of knowledge related to her artistic specialties and her work as a personal motivator, in a significant number of courses, seminars and workshops around Colombia and all over the world.

Sophia Von Wrangell's work has largely focused on documentary and artistic short films, promotional and advertising videos, experimental animation, music and institutional videos. She also completely wrote the script for his debut feature “Zugvogel ... Einmal Nach Inari”, with which he would receive the Silver Bear award at the Berlinale 98.