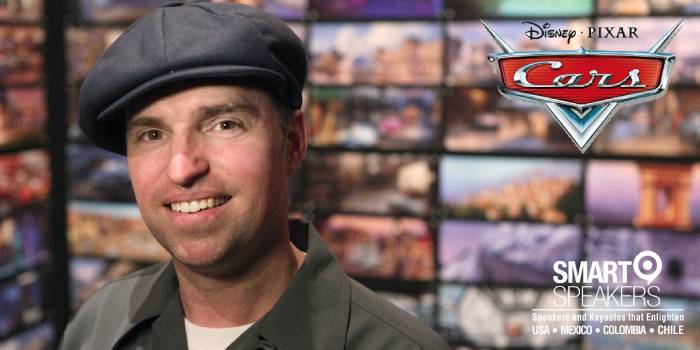 Jay Ward is a top innovation keynote speaker, a Creative Director of Franchise at Pixar, and a consultant on all Cars-related projects worldwide.

Jay Ward is an innovation keynote speaker, a Creative Director of Franchise at Pixar, and a consultant on all Cars-related projects worldwide. As Creative Director for the world of Cars, Jay Ward consults on all Cars-related projects around the world. He provides automotive and franchise expertise to both Disney and its partners in matters pertaining to Consumer Products, Interactive, Marketing, Publishing, and Theme Parks.

He also serves as a liaison with automotive manufacturers and museums working on Pixar-related projects. Jay Ward was the automotive and later franchise creative consultant on all three Cars films, the Cars Toons, and Cars Land at Disney’s California Adventure Park in Anaheim, California.

In addition to his work on Cars projects, Jay Ward worked in the art departments of Monsters Inc., Ratatouille, and Brave, and served as the associate producer of the 2008 Pixar short film Presto. Ward also runs the campus classic car show, the “Pixar Motorama” hosting vehicles from Jay Leno, Chip Foose, and many others.

Storytelling is the #1 business skill necessary to connect, motivate, and lead people in today’s world. Stories compel us to engage in experiences, learn lessons, and define our values and ourselves within our organization. Jay Ward brings his experience creating and developing blockbuster films at Pixar, and provides practical strategies that teach and inspire people and teams to connect more effectively with audiences on an emotional level. Jay uses the power of storytelling to bridge the gap between business and heart, driving your story toward one unforgettable selling point.

BUILDING A CULTURE OF SUCCESS AND WINNING: TRAITS OF PIXAR'S EARLY EMPLOYEES

Jay Ward, a  Pixar Creative Director, shares how Pixar was started and how they built and maintain a culture that inspires creativity, creates success for all stakeholders and produces best-selling, award winning films. Jay’s experience and insight will empower and inspire audience members to be better team members, leaders and how to forge stronger, more meaningful connections with their own team, clients and all stakeholders.

INSPIRING CREATIVITY IN THE WORKPLACE

One of the most essential resources for any business to stay competitive is new ideas that spark innovation. As  the Creative Director at Pixar Animation Studios, Jay Ward participated in building and sustaining the creative culture at Pixar from startup to the most successful filmmaking group in the history of Hollywood. Jay’s engaging and action-oriented talk will provide strategies on how to create a culture that encourages and nurtures new ideas, and embraces fear and failing as a necessary part of the creative process. He demonstrates how to empower relationships and build trust through authentic communication.

THE FUTURE OF CARS AND ENTERTAINMENT

Jay Ward was raised in a car shop, he is a “car nerd” and he’s the Creative Director of the hit movie Cars – working for Disney and Pixar. Who better than Jay to have visibility into trends and the future of entertainment and cars?