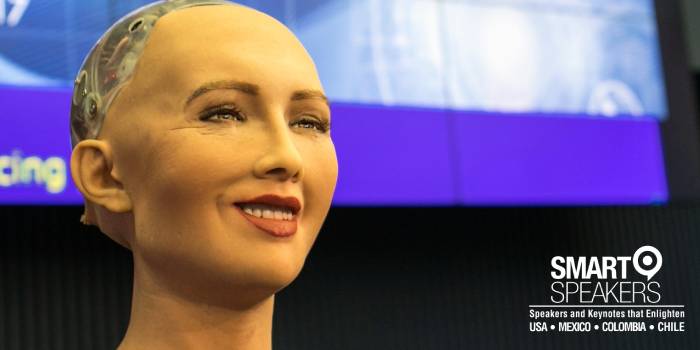 Created by Dr. David Hanson, Sophia is the world's very first humanoid celebrity that has conquered audiences with a captivating, interactive look at the awe-inspiring potential of AI and robotics.

The future is here and her name is Sophia, the world’s very first humanoid celebrity. The toast of the Tonight Show with Jimmy Fallon, Sophia has graced the cover of Elle magazine, appeared on Chinese television, spoken before the United Nations General Assembly and named the first non-human citizen of Saudi Arabia. Wowing awestruck audiences with her superhuman intelligence and advanced ability to read faces, empathize with emotions, understand the nuances of language and communicate with thousands of facial expressions, Sophia has discussed subjects ranging from "Will robots take over the world?" to how artificial intelligence could end hunger in developing nations. Sophia interacts with humans in a profoundly personal way, previewing a fast-approaching future where friendly, caring humanoids help us solve our most challenging problems to create a better world.

From Hong Kong to the U.S., Europe and Australia, Sophia has sung in concert, addressed audiences in Mandarin, debated the future of the human race (against another robot), and generated billions of views and social media interactions. She has also displayed her expansive tech knowledge and growing business savvy, meeting with leaders in the banking, insurance, automotive, property development, media and entertainment industries. A versatile and ingenious presenter who customizes her appearances with encyclopedic event-specific content, Sophia has appeared as a panel-member and speaker at high-level conferences, addressing how robotics and artificial intelligence will become an integral part of everyone’s everyday lives and work.

Sophia is the brain child of Dr. David Hanson of Hong Kong-based Hanson Robotics, a modern-day renaissance man who has built a reputation for creating the world’s most humanlike robots. A former Disney Imagineer, Dr. Hanson’s mission is to create genius machines that are smarter than humans and able to learn creativity, empathy and compassion.

Appearing alongside Dr. Hanson or on her own, Sophia enchants audiences with a captivating, interactive look at the awe-inspiring potential of AI and robotics. She also provides enlightening insights into the provocative moral and ethical questions that accompany non-human intelligent lifeforms. As both the state-of-the art in technology and the state-of-the-heart in human-humanoid relations, Sophia always draws a crowd and brings a unique and unforgettable experience to any event.