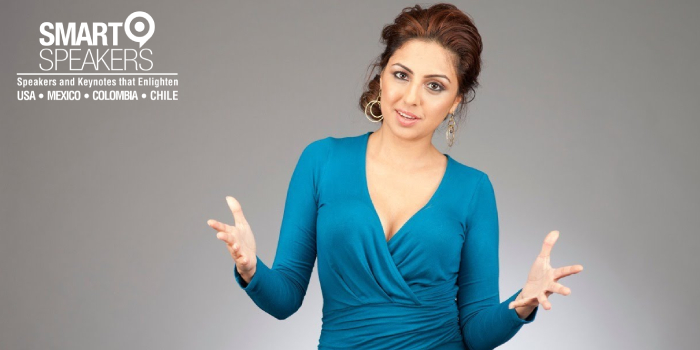 Futurologist and Broadcaster, Shivvy Jervis is an Award-winning Industry 4.0 Futurist. Named one of Britain's female Role Models of the Year for 2020 and a four-time national awardee.

How will you ensure you’re part of not just the Fourth Industrial Revolution but Industry 5.0? Which meaningful innovation breakthroughs will get us there? Reaching tens of thousands each month, Shivvy Jervis discovers, tests and then presents the most powerful breakthroughs at the intersection of digital, science and human psychology.

Named one of Britain's female Role Models of the Year for 2020 and a four-time national awardee, Shivvy Jervis is a Futurologist and Broadcaster cited by the World Economic Forum as "a thought leader beyond compare". Watch Shivvy in action in this highlights video from one of her acclaimed talks and a full montage here.

Shivvy Jervis' talks and broadcasts on ‘human-perception’ AI, immersive workplaces, digital identity and the ‘Internet of Everything’ have earned an astonishing 24 pieces of industry recognition. This includes nominations for Influencer of the Year and Woman of the Year by public vote.

In the first half of 2020 alone, Shivvy Jervis will keynote at the United Nations, chair a high-level panel at Davos and film a documentary on ‘emotive’ AI. Jervis also recently led a lauded fireside chat with Britain’s former PM David Cameron and keynoted the same event.

The curator of TED Talks commends Jervis as having "a remarkable ability to analyse the socio-economic impact of new technologies" and the UK’s former Digital Minister cites her “an extraordinary communicator. A seasoned broadcaster, Shivvy recently reported from the cockpit of the world’s largest airplane and tested the most pioneering smart city technology for a Discovery Channel documentary. She has also fronted Jobs of the Future, chaired live debate series Ringside Sessions (Ericsson) and hosts the NextTech Insider interview series.

Shivvy Jervis is also the former creator of innovation video series’ Digital Futures and The Trailblazers, which drew a combined 13 million+ viewership. Both were backed by the world's third-largest telco (Telefonica), for whom Shivvy was also Head of Digital for six years. A trusted media commentator and authority, Shivvy is regularly quoted in the likes of the Financial Times, and called on by BBC News.

Shivvy Jervis is equally at home headlining an event, presenting a broadcast or chairing a demanding event agenda. Her audiences term her as ‘riveting’, a ‘true expert’ and above all, ‘uncompromisingly passionate’.

The Future of Work

The Internet of 'Everything’