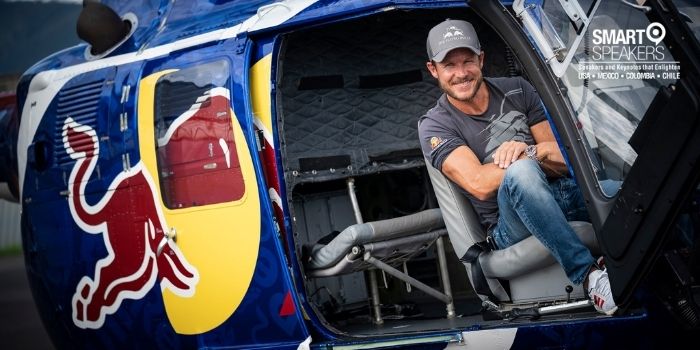 Felix Baumgartner is an audacious Austrian skydiver who made history by becoming the first human to break the speed of sound in free fall, after launching from the stratosphere, more than 39,000 meters above sea level.

On October 14, 2012, Austrian base jumper Felix Baumgartner broke three World Records: the first human to break the sound barrier without the assistance of a vehicle, the highest manned balloon flight, and the highest skydive. In the Red Bull Stratos mission, Baumgartner jumped 24 miles above earth, reaching a velocity of 843 mph before landing on his feet in eastern New Mexico nine minutes later. Eight million people watched the live streaming event making the jump the most watched live event ever on YouTube.

Born on April 20, 1969, Felix Baumgartner was raised in Salzburg, where he dreamed of skydiving and flying helicopters, inspired by astronauts on TV. He made his first skydive at age 16. After sharpening his parachute skills as a member of a Special Forces demonstration team for the Austrian military, he supported himself by repairing motorcycles before becoming a skydiving professional.

Felix Baumgartner’s original claim to fame was his free fall “flight” across the English Channel in 2003. Jumping from an aircraft at more than 32,000 feet over England, in a custom-built jumpsuit and helmet, Baumgartner reached speeds of 220 miles per hour, completing the 22-mile free fall to France in six minutes.

Felix Baumgartner has transitioned his training to a new thrill: Audi Motorsport. In 2014, he joined Audi Motorsport, driving an Audi R8 LMS, and competing in the endurance racing event, 24 Hours Nürburgring. After intense physical and driver training, Baumgartner led the team to a respectable 9th place finish.

Outside of his penchant for daredevil acts, Felix Baumgartner was awarded the 2012 BAMBI Award in the category of "Millennium," the Laureus World Sportsperson of the Year Award, and named the National Geographic Adventurer of the Year for his unique achievement. He has also been named to Vienna's Street of Champions.