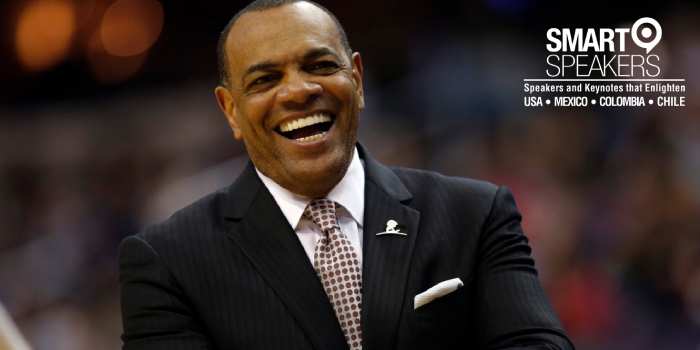 Selected 6th overall in the first round of the 1975 NBA Draft by the Portland Trail Blazers, Lionel Hollins earned a spot on the 1976 All-Rookie First team and went on to win an NBA Championship as a starter for the Trail Blazers in 1977.  A year later, he was an NBA All Star and named to the NBA’s All-Defensive team two years in a row.  After his lengthy playing career, he was inducted into the Halls of Fame of NJCAA, Arizona State University, Nevada High School Basketball, Southern Nevada Sports and the Pac 10.  In addition, he had his numbers retired and raised to the rafters by Arizona State, Dixie College, and the Trail Blazers.

With over 30 years of coaching experience, Lionel Hollins has coached on all levels (AAU, college, the minor leagues, and the NBA), and has become a well-respected coach and developer of players on and off of the court.   He has coached with seven different teams with the majority of his coaching being done with the Memphis Grizzlies, formerly known as the Vancouver Grizzlies.  During his stint with the Grizzlies he became the winningest coach in franchise history with an improved record each season.  He led them to three straight playoff appearances, their first playoff win, the franchise’s first playoff series victory, and had the best season with 56 wins that led them to the Western Conference Finals.  He also received the honor of being coach of the month four times.

Lionel Hollins has also been a prominent part of the Memphis community for 13+ years.  He mentored young men at Grizzlies Prep and created Lionel Hollins Charities (LHC) to further his passion of giving back.  Through the charity he raised funds to provide backpacks, supplies, and uniforms to underprivileged students, set up a mentoring program, donated bikes and books to children, and helped start a community garden to promote healthy eating habits.  He was also a spokesman for the Healthy Shelby’s 140/90: Living Life Under Pressure campaign.  He is an ambassador for St. Jude Children’s Research Hospital and has raised thousands of dollars for the organization. He also supports several other charities and organizations across the country.

In addition to his community involvement, Lionel is also a compelling speaker.  Lionel Hollins speaks all over the country talking to audiences about leadership, adversity, and success.  He has boosted team morale for corporations like Comcast and Hilton Timeshare and has spoken to the Rotary Club and members at Memphis Streets Ministries.  From his commencement speech at Southwest Community College to his talks at various schools, churches, and basketball camps, Hollins motivates and inspires people young and old alike.

A Lifetime of Leadership Lessons from the NBA

Coach Hollins is known for being the Memphis Grizzlies’ all-time winningest coach—leading them to three straight playoff appearances, their first playoff win, and the first playoff series victory in franchise history.  As a former player and NBA coach of 30+ years, Coach Hollins knows how to lead on and off the court.  Lionel has had first hand experience fostering a positive culture, motivating a team, managing crises, and bringing out peak performances.  From dealing with different player’s personalities to complaints about minutes played in a game or chances at shots, Lionel has learned to acknowledge that there is a problem, identify the problem, use quantitative data to back up his points and then present a resolution based on the data.  He has also helped players, such as Mike Conley and Marc Gasol, bring out their best by identifying and then believing in their talent, setting high expectations, and by getting them to believe in their own talent.  With all of his experience, Lionel has the leadership qualities and knowledge necessary to help you become a more efficient leader.

One Step At A Time:  Finding Your Way Through The Grey Areas In Life

Growing up in West Las Vegas in the 50’s and 60’s, in what would be considered a poor neighborhood, during desegregation, Lionel learned to overcome his circumstances and become one of the first in his family to leave Vegas and attend college.  Having lost his mother at a young age and having an absentee father, Lionel relied on first his grandmother, then the countless mentors in his life such as his elementary teachers to help him navigate his way out of Las Vegas.  With a successful career in the NBA one would think that life post playing would be smooth sailing but for Lionel that was not the case.  Among the uncertainties that Lionel faced, he made it a point to finish the college degree that he started before playing professionally.  After ten years of being out of the classroom, Lionel went back to college and received his diploma.  Throughout his childhood and adult life, Lionel has had to deal with various struggles and will inspire anyone to rise above their situations to be the best that they can be.

Paying It Forward:  Each One, Reach One

Lionel Hollins developed and started his own charity.  The importance of giving back was taught to Lionel at a young age and as he has gone through life, that lesson has stuck with him and continues to drive him today.  Lionel Hollins Charities (LHC) was created as a way for Lionel to pay it forward to the community.  There were several individuals that impacted Lionel’s life that he met through volunteer programs that he participated in as a youth.  These influential people taught him his responsibility in giving back and the saying, “each one, reach one.”  All of the people that made an impact in his life helped direct, guide, and lift him up.  LHC blossomed as God showed Lionel how he could leave his positive mark on young lives as was once done in his own life.  The charity targets youth and started by raising money to purchase school supplies and grew to add on a mentoring program, a bike give away, a health fair and free hair cuts.  LHC is now focused on education and is committed to helping bridge the gap of academic deficiencies in elementary school students. Through life stories and experience with his own charity, Lionel discusses using your talents and gifts to bless others, live purposefully, give hope, encouragement and inspiration.

Told through memories from childhood and life experiences, Lionel describes his journey with the Lord.  He talks about the defining moments that made him question the Lord and those that brought him closer to Him.  Lionel discusses his reliance on God and how when he keeps the Lord first, everything falls into place and there is no question that God had his hand in a particular situation.

Coach Lionel Hollins on The Court