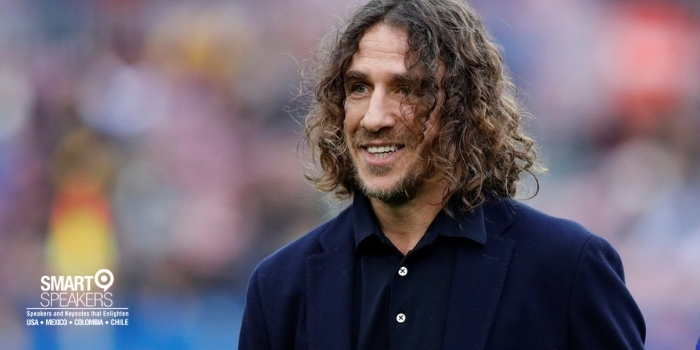 Carles Puyol is a Soccer Star, World Champion with the Spanish National Football Team and the most successful captain in the history of FC Barcelona.

Considered by many as the best captain in the history of FC Barcelona, Carles Puyol raised the category of the position to another level. He certainly knows how to lead and he was part of what many consider the best soccer team of all time, which in 2009 had a historic year winning every possible championship.

Carles Puyol carried out his entire professional career at Barça, but his beginnings were with his local side La Pobla de Segur. In his early years, he showed great promise and in 1995, at age 17, he joined the FC Barcelona youth system and moved into La Masia. He very quickly became a regular at the back for Barça B and on 2 October 1999 he made his long awaited debut for the first team, arriving at Barça as a right wing-back. He finished his career as one of the best central defenders in history. Clearly, the position was not important for Puyol and his goal was not simply playing or making money; his dream was to succeed at Barça.

Carles Puyol began to make regular appearances in the first team squad, often initially starting at right back. Thanks to his versatility and his appetite for hard work, he also adapted to playing at centre half, the position in which he would eventually establish himself both at Barça and in the national side.

Carles Puyol had to wait until the season of 2004-2005 to win his first major trophy with the Blaugranes. He was the club captain and a key member of Frank Rijkaard’s side that claimed the league title that season. Success continued the following season with Barça retaining their league title and claiming the Champions League title in Paris. During Josep Guardiola’s time as coach, Puyol continued to play a vital role in the Barça back four before an injury finally caught up with him in his final two campaigns as a player.

Carles Puyol retired from soccer as great men do, leaving behind his example and an indelible legacy. Now, in his new role as speaker, after preparing himself with absolute rigor and being coached by the best professionals as he did in his playing days, he shares exciting stories and wonderful insights.

Carles Puyol’s life reminds us that success is not something that suddenly shows up overnight, but instead it’s always the result of years of huge effort, sacrifice and passion. Success without work is simply not possible. Puyol is an example of honesty, leadership, strength, determination and character, which in turns helps us better understand how a kid with humble origins grew up to become one of the greatest players in soccer history.