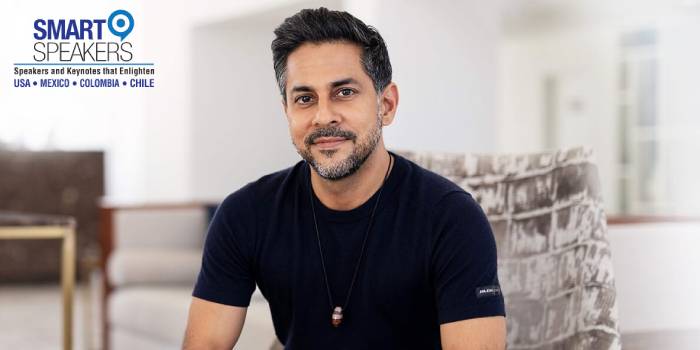 Vishen Lakhiani is one of today’s most influential minds in the fields of education and human consciousness. Founder of Mindvalley.

Vishen Lakhiani is one of today’s most influential minds in the fields of education and human consciousness. He is the founder of Mindvalley University and its 2 million-strong student base - which is now expanding across schools in Finland, Silicon Valley companies, and universities worldwide.

Vishen Lakhiani’s book, The Code of the Extraordinary Mind, made the New York Times Business Best Sellers List, and hit the coveted #1 spot on Amazon five times in 2017. It has since won several awards and been translated into 20+ languages, including Russian, Chinese, German and Spanish.

In 2017 Vishen Lakhiani twice became the #2 author in the world on Amazon Kindle, overtaking even JK Rowling and Stephen King. Meanwhile, his mobile apps like Omvana have become the bestselling Health & Fitness app in 30+ countries. His ideas on personal transformation and work culture are now being turned into multiple books, including The Code of the Extraordinary Team - due in January 2020 by Penguin Random House.

At Mindvalley, Vishen Lakhiani created the Quests learning platform: a next-generation method of online learning, which attains an unheard-of 60% completion rate on courses, in an industry where 8% is average. Vishen is also the founder of A-Fest, the transformational festival described as the “TED meets Coachella” of the personal growth industry.

Vishen Lakhiani is also the founder of Mindvalley University City Campus, where thousands of people move to a new city every year to immerse themselves in a 30-day campus dedicated to human transformation and co-creation. His next goal is to create the #1 education brand in the world, and reach 1 billion students so humanity can experience the biggest jump in its consciousness since the dawn of the human species.

The Code of the Extraordinary Mind: 10 Unconventional Laws to Redefine Your Life and Succeed on Your Own Terms 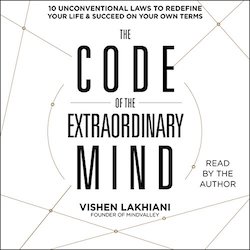 The Code of the Extraordinary Mind is a blueprint of laws to break us free from the shackles of ordinary life. It makes a case that everything we know about the world is mostly decided not by rational choice but instead by conditioning and habit. And thus most people live their lives based on limiting rules and outdated beliefs about pretty much everything - love, work, money, parenting, sex, health, and more - that they inherit and pass on from generation to generation.

The Buddha and the Badass: The Secret Spiritual Art of Succeeding at Work 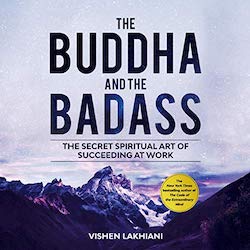 Vishen Lakhiani has turned his own life and company into his research lab. He’s codified everything he’s learned into the how-to steps in this book. The Buddha and the Badass teaches you how to master your work and your life.

Vishen brings in the science and studies on how to lead organizations in radically different ways where work becomes a healing force and humans get to function at their best. Ideal for founders and CEOs. Vishen’s new book by Penguin Random House, “The Code of the Extraordinary Team” will be on this topic. He covers the story of Mindvalley and goes behind the scenes of the unique culture he created that now has attracted people from 54 nations to move to Malaysia to work for this company.

This speech at Google HQ Dublin became the most watched speech on the Wisdom 2.0 conference Youtube page. It combines science, humor and meditation. It’s been watched over a million times on Youtube. This talk can be done in 30 mins but there is also a 7 hour version that goes deep in teaching the audience how to master advanced meditation.

The Four Levels of Consciousness

This speech was the highest rated speech in 7 years of A-Fest. It’s less theatrical, more academic and covers some of the key topics from “The Code of the Extraordinary Mind”. You’ll learn how humans can directly accelerate their conscious development and how to become closer to unity consciousness.

This is an example of comedy mixed with transformation as Vishen tells his origin story. This talk is more motivational. It leads to the popular 3 Most Important Questions exercise which is being used by millions around the world. The audience ends up with a single sheet of paper representing their boldest dreams and hopes for their life.

Futurism and State of the World

This is a speech that shows where humanity is heading based on predictions by 5 leading philosophers. This particular talk ties together ideas to show how humanity needs to evolve and where our politics, religion and business need to evolve to get us to the next stage of planet earth.

This speech is part biohacking and part spiritual awakening. It’s approaching one million views on Youtube, and has been sliced up by many third party motivational channels like Absolute Motivation. Vishen talks about forgiveness, self-love and being in the now as tools to enhance the human experience and make us more resistant to the ups and downs of life.

Sample Style - Vishen as a Panelist

Vishen was the first guest to ever appear twice on Tom Bilyeu’s Impact Theory. This video from MotivationHub shows some of the highlights of that interview.