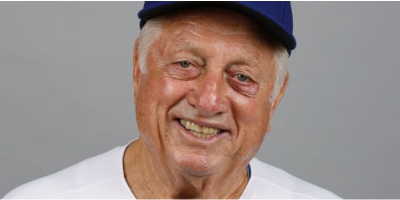 Regarded by many as baseball`s most popular ambassador, Tommy Lasorda begins his 57th season in the Dodger organization proudly serves as Special Advisor to the Chairman. He was named Vice President in July 1996 after retiring as manager, a position he held for the previous 20 seasons. Lasorda assumed all player personnel responsibilities when he was named the Dodgers` interim General Manager in June 1998. He relinquished his General Manager duties when he was promoted to Senior Vice President in Sept. 1998. In his current front-office capacity, Lasorda spends much of his time scouting, evaluating and teaching minor league players as well as spreading baseball goodwill to thousands as he makes more than 100 speeches and appearances to various charities, private groups and military personnel each year.

Last season saw Tommy Lasorda once again take his baseball and motivational expertise to Japan when the Los Angeles Dodgers and the Osaka Buffaloes agreed to a third year in their "friendship" agreement that centered around Lasorda consulting with the Buffaloes in all aspects of baseball. Lasorda, who along with the Buffaloes have extended their agreement for one more season in the hopes of building on their successes from 2001 and 2002, spent a total of four months over the last two seasons in Japan not only teaching the fundamentals of baseball to the players but also instructing their baseball operations staff about the business of baseball. Before the association with the Dodgers and Lasorda, the Buffaloes had finished last the previous two seasons but in 2001 they won their first pennant in 10 years and 2002 saw them finish second. In May 2000 he was named to manage the United States Olympic Baseball Team for the 2000 Summer Olympic Games in Sydney, Australia. His team, considered underdogs by many, won the Gold Medal on September 27, just five days after celebrating his 73rd birthday. The Gold Medal was Team USA`s first-ever since baseball`s inception as on official Olympic sport. On Nov. 6, the Tom Lasorda Heart Institute at Centinela Hospital Medical Center in Inglewood, CA officially opened. ??In 1997, Lasorda was elected to the National Baseball Hall of Fame by the Veterans Committee in his first year of eligibility. He was the 14th manager and 52nd Dodger inducted into the Hall of Fame. ??Lasorda compiled a 1,599-1,439 record and won two World Championships, four National League pennants and eight division titles in an extraordinary 20-year career as the Dodgers` manager. He ranks 13th with 1,599 wins and 12th with 3,038 games managed in major league history. Lasorda`s 16 wins in 30 NL Championship Series games managed were the most of any manager at the time of his retirement in 1996. His 61 postseason games managed rank third all-time behind Bobby Cox and Casey Stengel. ??Lasorda has won numerous awards throughout his career, including being named Minor League Manager of the Year by The Sporting News in 1970, Manager of the Year by UPI and AP in 1977, Manager of the Year by AP in 1981 and N.L. Manager of the Year by Baseball America and Co-Manager of the Year by The Sporting News in 1988, among others. ??Lasorda has been a spokesperson for the American Heart Association and has received a total of 5 honorary doctorate degrees from Pepperdine University, St. Thomas University, Cal State Long Beach, the University of Phoenix and most recently, Concordia University. In October 2002, the Federal Law Enforcement Agency honored Lasorda with the Community Service Award. Also honored with Lasorda was Dr. Henry Kissinger, former Secretary of State.